Home   Journal   Kyal and Kara The Beginning of a Reno Craze

I was the ripe old age of 16 and Kyal 17 when we first started going out. Kyal had just finished school on the Gold Coast and I was transitioning into year 12 in Newcastle. At this point Kyal was contemplating making surfboards for a living and I wasn’t sure what I wanted to do when I finished school but was interested in a career in health. We enjoyed window shopping in antique stores and started purchasing cheap second hand furniture that had good bones and restoring it, sanding back an old timber table, chests and book shelves – ‘making old pieces new again.’ This is definitely were we got a bug for the ‘transformation process’.

We knew pretty early on that we wanted a home to renovate. Realistically though, Kyal had just started a carpentry apprenticeship and his $250 pw apprentice wage definitely couldn’t pay a mortgage! I was 18 and Kyal was 19 when we opened up a joint bank account and started direct debiting $30 per week each into an account that would eventually go toward a house deposit. At this point I had finished school and was studying physiotherapy at the University of Newcastle and working part time at a shoe store and as a physiotherapy assistant at a local physiotherapy practice. Kyal was chipping away at his carpentry apprenticeship (pardon the pun), for a brief period, he also had a second job of an evening working at a local service station.

In February, 2008 we tied the knot after being together for 4 years and in October the same year we bought our first home. Our goal was always to have a beautiful home by the sea. Having scoped the market for about a year, we found the one!

Kara (and Jonah) standing in the backyard of our first home on the Central Coast, NSW

This was not our dream home by any stretch of the imagination and neither was it by the sea but we knew it was a stepping-stone in the right direction. A little fibro shack on a beautiful 714sqm block. There was nothing special about the house except for the fact that (along with the bank), we now owned it! We saw potential to renovate and extend and create a beautiful family home (for someone else).

We started with a small cosmetic Reno of the existing home, to make it livable and comfortable. We were, however, conscious of not spending too much until we had the overall plans -so as not to waste valuable funds.

At the end of 2008 I had completed my physiotherapy degree and was ready to commence work fulltime with NSW Health. All through university I had visions of my first pay cheque being spent on clothes and shoes. However, when the time came around, it sadly went straight to the mortgage and bills – the price you pay!

One of the first things we did was retain the land down the side of the house and plant some hedges that would one day be established. We were basically looking for jobs we could complete, that would work with, or set us up for our future renovation plans.

We had began sketching up ideas for a renovation to turn our little shack into a four bedroom home with a study and two living areas, including a master bedroom wing. Don’t get me wrong, we had big plans but no idea how we were going to pay for them! We thought it best to set ourselves the goal, work towards the challenge and were determined to achieve what we set out to do knowing that it wasn’t going to happen overnight. We had our plans drawn up by a draftsman and because it was a complying development we submitted to a private certifier as opposed to going through council, which can be a bit more time consuming. When our plans had been approved and it was time to begin our structural renovation, we had been living in the home almost one year. We had the home revalued, and borrowed an extra $30,000, which we would use, along with a small amount of savings, to go towards our renovations. We were under no illusions that this would get us a completed renovation on the scale that we had planned, but thought with Kyal and myself doing most of the work, (it also helps that one of our best mates is an electrician – thank you Trev from Sparky & Co – yes a shameless plug), we knew that once we at least got the renovation to lock up, we could do it in our own time from there.

During this period, I was working full-time as a physiotherapist and Kyal was sub-contracting full-time as a carpenter to local builders. All the work on our house was done in afternoons, evenings and weekends, including some all-nighters! Our renovations started at the rear of the home, with the demolition of the existing toilet and laundry. We actually had the toilet temporarily relocated into the old lounge room, which was set to eventually become a bedroom. It was awkward for a little while (10 months!) to say the least – mainly when friends were over. We hired a machine to cut the block, and then set-out for foundations.

With the bearers, joists and subfloor complete, the exterior walls were erected and new windows were installed, this also included two raking windows. The large raking window was delivered without glass and Kyal and I installed the frame, this was one of the scariest memories for me as it was so awkward and heavy. We then pitched a new roof over the new extension, this roof was re-pitched to extend all the way over the existing home. We literally built a new house over the top of the old one! This gave us somewhere to live while virtually building a new home underneath.

When the time came to cut into the old roof, the storm clouds literally came out of nowhere, and it rained for about two weeks straight! All our earthly possessions were literally being protected by tarps swung across our existing roof! I recall one night in particular that was so windy the tarps were blowing in the breeze and as the rain came down Kyal climbed up in the middle of the night onto the roof framing and was trying to tie down the tarps a little more securely. I remember praying to God that Kyal would not fall and break his neck or get struck by lightening! Not the ideal way to renovate – don’t try this at home! Yes, we have learnt so many things along the way. We rejoiced the day we finally sheeted the roof, and our home was watertight.

At this point we had well and truly run out of our initial kitty of funds, and everything we did was from money left over from both our wages each week. We gradually made progress, slowly but surely and did some overseas travel in between. During our renovations Kyal had pulled out a kitchen of a job he was working on that was in good condition, we installed this kitchen temporarily in our renovation, knowing that down the track we would replace it with a larger kitchen, more suited to a family. Towards the end of 2013 we had finished our renovation and spent three months travelling South America and upon return we were ready for a new challenge!

And then came along The Block

Block applications were being advertised on television and after spending a gruelling three years sinking money into, and renovating our own home, we thought how fun would it be to spend 3 months working full-time on a quick renovation with someone else’s money. The thought of being on national television was terrifying for me (not Kyal), however I was excited about the idea of a new challenge and thought if I had a job to do, I would just be myself and get on with the job! Our friends helped us film an audition video that obviously made some kind of impression, because never in our wildest hopes or dreams did we expect it to change our life the way it has, and what a ride it has been!

After our Block experience, we came home and completed the final piece of the puzzle – updating the kitchen. The ‘Dekton’ benchtop from Silestone was the standout feature of the kitchen and was definitely worth the wait. 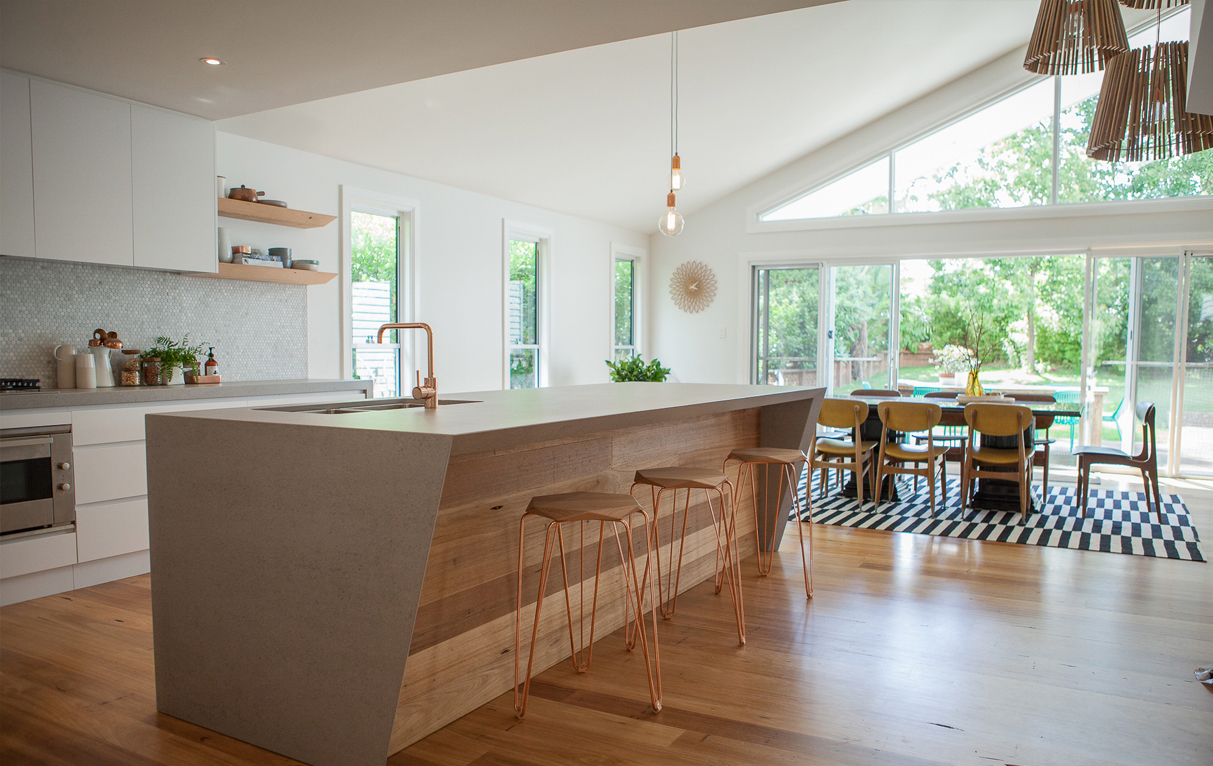 Towards the end of 2014, a beautiful little beach shack in Bateau Bay came up for auction and we were the successful bidders! This is a project to discuss in another Journal Post – excited to share the plans for this!

In April 2015, whilst we were down in Melbourne filming for Reno Rumble, we auctioned off our beautiful home. The end of a fun, challenging and rewarding chapter in our lives and the start of many more renovations..